How to Create an Awesome Bus Experience

Ideas from Share the Bus for making a bus trip a great experience for your passengers.

Companies say they’d have to increase fleet size if seat belts are made mandatory.

A new plan nearly forced students to walk 30 miles a week, but protesters were successful in stopping the plan.

This bus driver of 26 years saved a student’s life by paying attention to traffic.

The bill will require school bus stops to be more than 500 feet away from the homes of sex offenders.

Why are There Stones Along Railway Tracks?

Have you ever noticed the stones along the sides of railway tracks and wondered why they are there?  Here’s your answer!

Most Public Transit Systems are Too Big for Humans to Comprehend

If you’ve ever had a hard time reading a transit map, it may be because the systems, and all the choices you must make about routes, times, and modes of transit, are just too much to comprehend.

Problems like people leaving trash on the train and taking up too much space on the bus have been around for a 100 years.

In some cities, commuting can cost as much as 25% of an individual’s salary!  One more reason to take public transit.

The Progress of Public Transportation in Los Angeles 1990 vs. 2040

It’s interesting to see the growth!

How the CTA Keeps Chicago Moving Through Winter

They have a lot of systems in place for battling the snow and cold!

Public transportation saves money, is good for sustainability, reduces congestion and so much more!

New research considers how affordable public housing really is when access to public transportation is taken into consideration.

General Transit Feed Specification (GTFS) is an important part of urban mobility.   This is the format we put transit schedules into, so they can be picked up by Google and trip planning apps.

A real time system made possible by advances in AI.

The hyperloop will transport passengers at 800 miles per hour from one major city to the next.

Eltis on sustainable urban mobility and how a railway station in France became on intermodal hub.

Employee Appreciation Day is March 4th, and we have some awesome ideas for making it a special day for your hard working employees.

What do you think about these stories?  We’d love to hear from you!

Mothering Sunday is March 6 in the UK, and if you’re planning to go see Mum, there are no shortage of transit options. 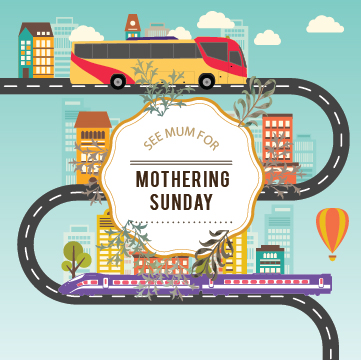 The UK offers over 100 ferry routes to France, Ireland, Belgium, Spain and more!  This is a great option if you want to have your car with you when you get to your destination.  Does mum live closer than a ferry ride away?  Pick her up and take her on an outing!  Take the ferry, then take a drive through the countryside.

Coaches are a lovely way to get around Britain, allowing you to relax and enjoy the sights instead of worrying about driving.  They’re also one of the least expensive ways to travel, so if you’ve thought that you couldn’t afford to see Mum this year, maybe an inexpensive coach ride is the way to go.

If you need to quickly get from London to Paris, the undersea train can get you there in just over 2 hours.  There aren’t many places in the world where you can hop over to another country for lunch, so take advantage of where you live and take mom out to see the sights and enjoy some new cuisine.

For smaller, local trips, bus and rail offer convenience and speed.  You don’t have to worry about parking your car or the wear and tear on your vehicle.  If Mum takes a ride with you, and she’s worried about safety, let her know that the bus and train are safer than driving.  Traveling this way will also give the two of you the chance to fully connect with each other during the ride, rather than you being focus on traffic.  And if you have kids and bring them along, they’ll love the bus or the train, and Grandma will love watching their excitement!

Whichever way you choose to see Mum this year, we hope you have a lovely day together!  Happy Mothering Sunday from AddTransit!

When this small school didn’t have enough dedicated library space in its building, they turned a red double decker bus into a library. that even has wifi.   They kids sure seem to love it!

The WePods driverless bus had a test run on public roads last week.  It goes a maximum speed of 25 kilometres and will soon have cameras, lasers, GPS and radar.

A bus driver’s simple act of tying an elderly woman’s shoelace has inspired many people to be more kind.   William Harris of Bus Éireann in Cork, Ireland also inspired people to share stories of other bus driver who had done kind deeds.   We want to hear lots more of these stories for Transit Driver Appreciation Day on March 18th.  Check back here for the chance to nominate your bus driver for a prize.

While this is specific to the city of Rockville, it does bring up some areas that are challenges for many bus companies.  How smaller companies can compliment, rather than compete, with the larger routes.  making long-range plans, the cost of tunnels, and securing funding.

This train driver makes the morning commute fun for his riders by telling jokes and asking quiz questions over the PA system of the train.  Passengers tweet the answers to the quiz questions with the hashtag #timetunneltrain.

Israel now has a budget of 2.3 billion shekels to improve electrification, provide new signalling, and increase the number of passenger trains in the country.

The railway use d to transport 4 million parcels a day.  Now it is being reopened as a heritage site by the Heritage Lottery Fund.

The Hyperloop is a ground transport concept that will connect people from one major city to another.  MIT and other top ranking teams will build their pods and test them at the first Hyperloop test track.

From rethinking traffic design to better technology to more sustainability, some cities are doing a great job with public transit.

Changing demographics and social preferences are changing the needs of urban mobility.  Communication, leveraging existing infrastructure, mobility grids and more ideas to help “people meet their needs in the most efficient and effective ways possible.”

I Love Transit: An Interview with Brent Toderian

Brent Toderian is the city of Vancouver’s former Chief City Planner and urbanism consultant around the world.   In this interview, he talks about why he loves transit, his earliest memories of transit, and his excitement about how transit fits into a multimodal city.

11 Emerging Technologies That Could Have Major Impacts on Transportation

Among the technologies are the hyperloop and materials science in infrastructure.  Amazing ideas that could transform how we travel!

Let us know what you think about any of these stories!

This article from News Geography takes a look at why bus ridership is declining, and they say the data points to a decrease in bus service being the reason.

Should Colfax Give Up Car Lanes for Faster Bus Service?

Specifically about Denver, Colorado, but applicable to any city. Is this a trade worth making?

Back to College for Bus Workers

Bus Drivers in the UK are getting more than satisfying work and a paycheck from their jobs. They’re learning foreign languages and other fun and useful skills right out of the First Group bus company’s garages. What a great way for a company to care for the whole employee!

Over half of the buses registered in 2015 met the Euro VI standard for emissions. The article talks about the reasons for this boost in compliance, and how the companies will continue to improve their reduction of emissions.

Metro McAllen shared their excitement about their new all electric bus with a picture on Twitter.

Bus drivers in North Carolina are now using hand signals to let kids know if it’s safe to cross the road or not.

When a School Bus Full of Kids was Heading for a Ditch, This Boy Saved Them in the Most Amazing Way

14 year old Cory jumped into the driver’s seat and hit the brake when the bus driver became unconscious after a car hit the bus.

Their new website is looking very nice with easier navigation and better response for mobile users. Check it out!

This school district wants to cut aides from its buses to save money, but some parents are in opposition. What do you think? Should all school buses have aides?

The Hyperloop is a vacuum tube that will be able to transport passengers at 800 MPH from one major city to another at a fraction of the cost of high speed rail.

Switzerland is testing the world’s longest railway tunnel, which will have regular service by the end of the year.

France is working on tunnels for a high speed railway.

The Department for Transport and Transport for London are working together to potentially create a London Suburban Metro.

County to Provide Free Bus Passes for Those Registering to Vote

Milwaukee County will spend up to $20,000 to provide free bus passes for voters.

US Department of Transportation Secretary Anthony Foxx discussed the infrastructure deficit and ways to improve planning for transportation dollars.

The American Public Transportation Association lists 10 reasons to thank the US Congress for passing the FAST Act, the first long term transportation bill in 10 years.

A Good Transport Plan for Bristol

SusTrans lays out a plan that’s greener, cheaper and more efficient than reliance on fossil fuels.

Orange juice is being flown in to the 2016 Icelandair Mid-Atlantic Trade Show to show off one of Florida’s best features.

We’d love to hear from you!  Let us know what you think about any of these topics.