When this small school didn’t have enough dedicated library space in its building, they turned a red double decker bus into a library. that even has wifi.   They kids sure seem to love it!

The WePods driverless bus had a test run on public roads last week.  It goes a maximum speed of 25 kilometres and will soon have cameras, lasers, GPS and radar.

A bus driver’s simple act of tying an elderly woman’s shoelace has inspired many people to be more kind.   William Harris of Bus Éireann in Cork, Ireland also inspired people to share stories of other bus driver who had done kind deeds.   We want to hear lots more of these stories for Transit Driver Appreciation Day on March 18th.  Check back here for the chance to nominate your bus driver for a prize.

While this is specific to the city of Rockville, it does bring up some areas that are challenges for many bus companies.  How smaller companies can compliment, rather than compete, with the larger routes.  making long-range plans, the cost of tunnels, and securing funding.

This train driver makes the morning commute fun for his riders by telling jokes and asking quiz questions over the PA system of the train.  Passengers tweet the answers to the quiz questions with the hashtag #timetunneltrain.

Israel now has a budget of 2.3 billion shekels to improve electrification, provide new signalling, and increase the number of passenger trains in the country.

The railway use d to transport 4 million parcels a day.  Now it is being reopened as a heritage site by the Heritage Lottery Fund.

The Hyperloop is a ground transport concept that will connect people from one major city to another.  MIT and other top ranking teams will build their pods and test them at the first Hyperloop test track.

From rethinking traffic design to better technology to more sustainability, some cities are doing a great job with public transit.

Changing demographics and social preferences are changing the needs of urban mobility.  Communication, leveraging existing infrastructure, mobility grids and more ideas to help “people meet their needs in the most efficient and effective ways possible.”

I Love Transit: An Interview with Brent Toderian

Brent Toderian is the city of Vancouver’s former Chief City Planner and urbanism consultant around the world.   In this interview, he talks about why he loves transit, his earliest memories of transit, and his excitement about how transit fits into a multimodal city.

11 Emerging Technologies That Could Have Major Impacts on Transportation

Among the technologies are the hyperloop and materials science in infrastructure.  Amazing ideas that could transform how we travel!

Let us know what you think about any of these stories!

Paper railway tickets sold by a conductor have now almost universally been replaced by rail ticket booking software.  The methods for sale, verification of correct purchase before and during travel and when alighting, whilst monitoring passenger numbers and sales costs  have greatly changed.

Nowadays passengers expect to be able to purchase their tickets any hour of the day, irrespective of whether they are near the train line or not.  They expect convenience.  Yet rail companies personnel  budgets are tight.  So many rail companies have adopted a high upfront cost approach by installing expensive hardware at multiple locations to sell tickets.  Unfortunately these machines also have an ongoing cost resulting from maintenance, repair, connectivity, servicing and replacement.  Sooner or later the railway looks to find a way to reduce this cost too.

Other options including selling your tickets through stores and other shops that passengers may frequently visit. However, your company is not their key focus so your brand is lost amongst their many other products.

Many larger railways have adopted electronic cards, similar to a bank card ranging from just an electronic strip where the balance is stored on a head office computer system, or with more advance electronics where the balance is stored on the card itself and then is updated to the head office computer system every now and then.  These cards have great benefits in that you can now track where the passenger boards and alights, thus giving you detailed statistics on passenger numbers.  However, they also have huge costs as trains or stations or both need to be fitted with the necessary hardware to sell, verify and process passengers.

And then there is the challenge with vending machine sales and electronic cards of end of life.  Typically the installation of all the related hardware occurred at one point in time.  It involved a massive upfront cost, significant deployment of contractors or personnel to install the machines, and costly multi-year contracts with vendors.  Then 5, 10, 15 years later they all must be reviewed again.  And the vendors now have a almost monopoly position able to lift their prices, because only they know how to fix your system.

Well, there is now a new solution to this.  The humble smartphone, mobile phone, cell phone (call it what you will) and the internet allows you a new way forward.  Your customers now carry mobile phones and using AddTransit rail ticket booking software for your sales and reservations you will be able to implement a new network wide ticketing solution almost immediately.  Mobile apps allow the purchase of tickets and the verification of tickets.  Customers have the flexibility of 24×7 purchase and reservations no matter where they are.  And you have the location based reporting so that you can improve your routes and timetables whilst monitoring your costs.

Find out more about our Railway Ticket Booking Software today. 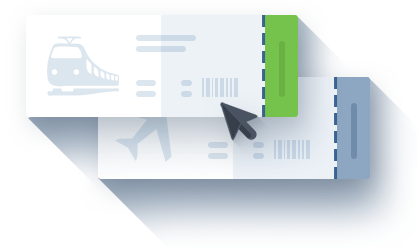 Online ticket booking software for bus, train, ferries and tours is now available at AddTransit.  Easily add your schedule, key stops and fares, add a link to your website and you are up and running!

In the past, you had to hire web specialists to create custom ticketing systems for you, but now with AddTransit you can be set up and running quickly.  You can focus on the things  that matter, while tickets are sold online.  Of course, there are administration functions that allow you to monitor bookings, capacity and make changes to bookings if passengers need assistance.

The benefits of online ticket booking software means that reservations for your bus, train or ferry service or bookings for your tours, can be managed by the customers themselves.  This allows them 24×7 flexibility in booking 365 days of the year,  removes the need to queue at your ticket counters, and allows your staff to focus on providing greater value.

We encourage you to try AddTransit for yourself.

When considering steam train ticket software for your heritage railway, there are many things to think about.  Here’s five that we think are key:

You need to ensure that the software meets the needs of your business. You’ll need to check that the software handles your fare structure (i.e. Adult, Child, Family, Seniors, Special Trips, Discount Offers, etc.)  Do you need to have passenger manifests or historical reports?  Do you want to be aware when passengers with special needs might need support? Can passengers sit anywhere or travel on any trip during the day, or is there restrictions and does the software support this? You’ll need to identify what you have now, determine what you want in the future, and be aware that some things may need to change.

2) Who will be using it and what training is required?

Many heritage and steam railways are run primarily by volunteers.  This means that any new systems/software must be simple and require minimal training.  Determining who will need to be trained and their level of training, is directly related to the who will be using it and why.  Some users will provide customer service in the form of front desk or telephone operators, others may be managing boarding and seating, whereas others will be more concerned about the accounting or future projection of demand.  Be sure you know who will use the software, the type of training they require and understand that volunteers will have restricted and often, differing availabilities for training.

3) Where will the software be installed?

In the old days, software was created “bespoke” or individually built for each customer.  The software was then installed on personal computers, tills/cash registers and run either standalone or over a network.  This had significant upfront cost and with limited budgets meant that upgrades were often deferred indefinitely.   Today software is typically available via the internet with data stored in “the cloud”.  Access to the software is via WIFI or 3G/4G services meaning that you are no longer limited to specific locations.  This allows additional “ticket offices” up and down the line that only require a wireless connection and iPad, tablet or PC to operate.  It also allows passengers to purchase their tickets online and reservations to be checked while the train is moving.  The software is automatically upgraded for all users, meaning you always have the latest version.

Cost has been left until now (number #4), because although budgets are always limited, the first three reasons will determine the total cost.  The total cost must include the upfront, ongoing and organisational costs when choosing steam train ticket software.  The software costs can be structured a number of ways including the number of users, a periodic fee (e.g. monthly or annual) or a one-off cost with maintenance upgrades.  However, it is often the hidden costs of 1) the functionality that is available, 2) the users and time/effort and training, and 3) the way that the software is deployed, that will end up having a much greater impact on the day to day running of your railway.

Of course, there are a variety of other factors that will affect how you choose which steam train ticket software is right for you.  They include the level of vendor software support and how passionate they are about steam/heritage vehicles, the current software you have and if it is truly “upgradeable” when the hidden costs are calculated,  and then more emotional factors such as “I like the way the screen does this”.  Be careful when considering other factors, as although they may seem important, the real consideration should always be passenger and team experience and the best return on your investment.

That’s all for today.  Have a great weekend.