If you are looking for cheap vehicle tracking software, AddTransit is the right place.  Our smartphones apps allow you to track your vehicles and see their current position on a map. 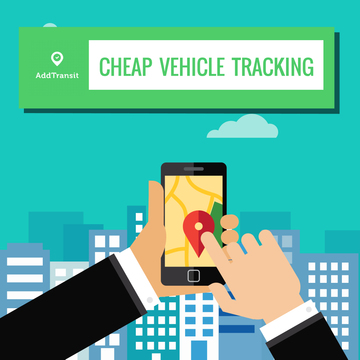 So how does it work?

It is very simple, you just signup to AddTransit and then add each vehicle’s details.  You also add the users that will be allowed log into the system.

Then each of your users download the AddTransit app onto their GPS enabled smartphone.

Before they start to drive, they log into the app and select their current vehicle and their route or service. They press START and off they go.  The app keeps sending their location until they tell the app to stop.  Your smartphone is acting as a Vehicle Positioning System, but without the huge cost that is normally associated with such systems. Wow!

The vehicle location can then easily be seen in head office. If you enable GTFS Real-time (a standard that is for reporting realtime locations of vehicles), you can also make your vehicle locations available for your customers to see on internet mapping software such as Google, Bing or Yahoo Maps and journey planning apps.

No longer do you need to contact staff to find out where they are up to.  Your staff can concentrate on the safe travel of their passengers and giving these people a great customer experience.  Your passengers are even more excited as now they can know when their vehicle is approaching or is delayed and can plan accordingly.

This article from News Geography takes a look at why bus ridership is declining, and they say the data points to a decrease in bus service being the reason.

Should Colfax Give Up Car Lanes for Faster Bus Service?

Specifically about Denver, Colorado, but applicable to any city. Is this a trade worth making?

Back to College for Bus Workers

Bus Drivers in the UK are getting more than satisfying work and a paycheck from their jobs. They’re learning foreign languages and other fun and useful skills right out of the First Group bus company’s garages. What a great way for a company to care for the whole employee!

Over half of the buses registered in 2015 met the Euro VI standard for emissions. The article talks about the reasons for this boost in compliance, and how the companies will continue to improve their reduction of emissions.

Metro McAllen shared their excitement about their new all electric bus with a picture on Twitter.

Bus drivers in North Carolina are now using hand signals to let kids know if it’s safe to cross the road or not.

When a School Bus Full of Kids was Heading for a Ditch, This Boy Saved Them in the Most Amazing Way

14 year old Cory jumped into the driver’s seat and hit the brake when the bus driver became unconscious after a car hit the bus.

Their new website is looking very nice with easier navigation and better response for mobile users. Check it out!

This school district wants to cut aides from its buses to save money, but some parents are in opposition. What do you think? Should all school buses have aides?

The Hyperloop is a vacuum tube that will be able to transport passengers at 800 MPH from one major city to another at a fraction of the cost of high speed rail.

Switzerland is testing the world’s longest railway tunnel, which will have regular service by the end of the year.

France is working on tunnels for a high speed railway.

The Department for Transport and Transport for London are working together to potentially create a London Suburban Metro.

County to Provide Free Bus Passes for Those Registering to Vote

Milwaukee County will spend up to $20,000 to provide free bus passes for voters.

US Department of Transportation Secretary Anthony Foxx discussed the infrastructure deficit and ways to improve planning for transportation dollars.

The American Public Transportation Association lists 10 reasons to thank the US Congress for passing the FAST Act, the first long term transportation bill in 10 years.

A Good Transport Plan for Bristol

SusTrans lays out a plan that’s greener, cheaper and more efficient than reliance on fossil fuels.

Orange juice is being flown in to the 2016 Icelandair Mid-Atlantic Trade Show to show off one of Florida’s best features.

We’d love to hear from you!  Let us know what you think about any of these topics.

When considering steam train ticket software for your heritage railway, there are many things to think about.  Here’s five that we think are key:

You need to ensure that the software meets the needs of your business. You’ll need to check that the software handles your fare structure (i.e. Adult, Child, Family, Seniors, Special Trips, Discount Offers, etc.)  Do you need to have passenger manifests or historical reports?  Do you want to be aware when passengers with special needs might need support? Can passengers sit anywhere or travel on any trip during the day, or is there restrictions and does the software support this? You’ll need to identify what you have now, determine what you want in the future, and be aware that some things may need to change.

2) Who will be using it and what training is required?

Many heritage and steam railways are run primarily by volunteers.  This means that any new systems/software must be simple and require minimal training.  Determining who will need to be trained and their level of training, is directly related to the who will be using it and why.  Some users will provide customer service in the form of front desk or telephone operators, others may be managing boarding and seating, whereas others will be more concerned about the accounting or future projection of demand.  Be sure you know who will use the software, the type of training they require and understand that volunteers will have restricted and often, differing availabilities for training.

3) Where will the software be installed?

In the old days, software was created “bespoke” or individually built for each customer.  The software was then installed on personal computers, tills/cash registers and run either standalone or over a network.  This had significant upfront cost and with limited budgets meant that upgrades were often deferred indefinitely.   Today software is typically available via the internet with data stored in “the cloud”.  Access to the software is via WIFI or 3G/4G services meaning that you are no longer limited to specific locations.  This allows additional “ticket offices” up and down the line that only require a wireless connection and iPad, tablet or PC to operate.  It also allows passengers to purchase their tickets online and reservations to be checked while the train is moving.  The software is automatically upgraded for all users, meaning you always have the latest version.

Cost has been left until now (number #4), because although budgets are always limited, the first three reasons will determine the total cost.  The total cost must include the upfront, ongoing and organisational costs when choosing steam train ticket software.  The software costs can be structured a number of ways including the number of users, a periodic fee (e.g. monthly or annual) or a one-off cost with maintenance upgrades.  However, it is often the hidden costs of 1) the functionality that is available, 2) the users and time/effort and training, and 3) the way that the software is deployed, that will end up having a much greater impact on the day to day running of your railway.

Of course, there are a variety of other factors that will affect how you choose which steam train ticket software is right for you.  They include the level of vendor software support and how passionate they are about steam/heritage vehicles, the current software you have and if it is truly “upgradeable” when the hidden costs are calculated,  and then more emotional factors such as “I like the way the screen does this”.  Be careful when considering other factors, as although they may seem important, the real consideration should always be passenger and team experience and the best return on your investment.

That’s all for today.  Have a great weekend.