Transit Awareness Day is February 2, and we want to celebrate by listing a few of the many great benefits to taking public transit from countries around the world. 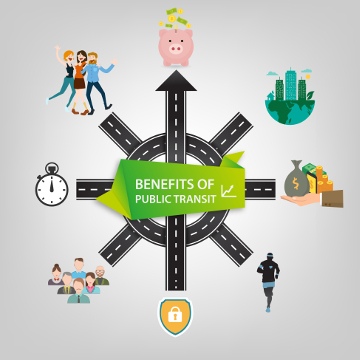 OzeBus of Australia says, “Shifting from cars to public transport can deliver a 65 per cent emissions reduction during peak times and a 95 per cent reduction in emissions during off peak times from the commuters that make the shift.”

Taking the bus or train is a huge way for any individual to reduce their carbon footprint. Even buses that are heavy polluters take around 40 cars off the road every time they run, and most countries are adopting policies to make their buses as green as possible. In the UK, these buses are producing 30% less emissions of greenhouse gases.

Australia estimates a reduction of $27 million per year in road crash costs and household savings of $176 million in fuel costs.

Because public transit encourages agglomeration, or the gathering of more people in the same place, the economic value can be anywhere from $1.5 million to $1.8 billion depending on the size of the city in the US.

Can Help You Get Fit

Public transit is a great way to get healthy. It can help you burn calories, get outside for more fresh air and sunshine, reduce depression and build healthy habits.

Public transit has about one tenth the number of traffic casualties as cars have, and transit travel has lower overall crime rates than automobile travel, making it a safe and secure way to travel.

When people ride the bus or train, they meet other commuters and form connections with their local community. It’s a great way to make friends and see more of your city.

Gives You Time to Work or Get Down Time

Of course, not everyone likes connect with other people during their commute. If you just want to be left alone, you can pop in some ear buds and take the time to catch up on work, read a book or take a nap, which is much more enjoyable than stressing out about traffic while you drive a car. Buses and trains are increasingly being equipped with WiFi so you can get even more done while you travel.

If you’ve ever ridden public transit with a little kid, you’ve seen how their eyes light up at the site of the oncoming train, they glue their faces to the window of the bus to see all of the exciting sites, and they’re nearly bursting out of their seats with the joy of the ride.  Be inspired by their happiness and enjoy the ride!