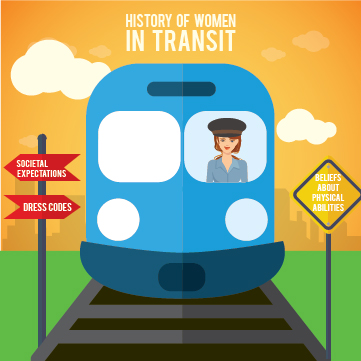 Karen Harrison was the first female train driver in Britain.  She applied with the British Rail at only 16 years old, and when the recruiters met her and found out she was a woman, they tried to get her to become a secretary instead.   She said her career was “Ten years of hell, ten years of heaven,” because she enjoyed the job, but had to endure verbal and physical abuse from her male co-workers.   She was also an active trade unionist and eventually presided over the train driver’s union’s annual conference.

According to the WTS Glass Ceiling Baseline Study, in some cities in the US, women make up 36% of all transit employees, but only 4% of transportation companies having 50% or more women in management positions.